After visiting Kathy in Pittsburg, I went straight to Savannah, Georgia for a business trip. After spending the past few years in the frozen tundra of Wisconsin (and many evenings reading and re-reading Gone With the Wind) I was excited to see one of the great Southern cities. Below are details and photos from my personal excursion through Savannah. It was a wonderful place and if I have my way, perhaps I’ll move there someday!

The night before my adventure, I made a tentative schedule for the day based on recommendations from my friend Julia (who frequently traveled to Savannah for business) and a very talkative older lady I met on the plane who lived on Tybee Island.

The next day, a very colorful cab driver took me downtown. On the way, I heard the Steve Harvey Morning Show on the radio–that is one of the parts of living in the South that I miss. Steve had a good word about waiting for what God wants for you because “He can do the unthinkable and unimaginable” and to pray for what God wants for you instead of what you want. Once I arrived at my destinations, the cab driver warned me to “stay cool.”

First stop: Breakfast at B Matthews (recommended by the chatty plane lady as one of the places where locals eat). Such a cool place! The restaurant smelled amazing; I was engulfed in a cloud that instantly made my mouth water. I ordered biscuits and gravy with a side of sausage and a Bellini–SO GOOD. Seriously, the sausage was spicy and the biscuits were soft and that Bellini had me leaning a little to the left. I finished it at the restaurant so I had to wait to see if “open container realness” was in fact real. 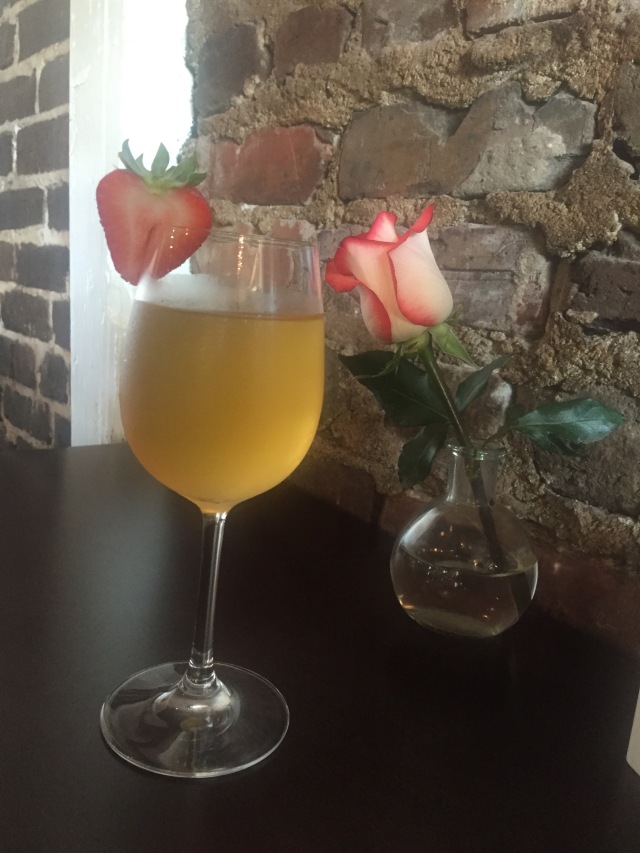 I wandered down Bay Street for a bit to check out the scenery–Savannah is breathtakingly beautiful. Eventually I made my way down a very steep set of steps to River Street and bought a pair of cateye sunglasses. It was deliciously hot and sunny! 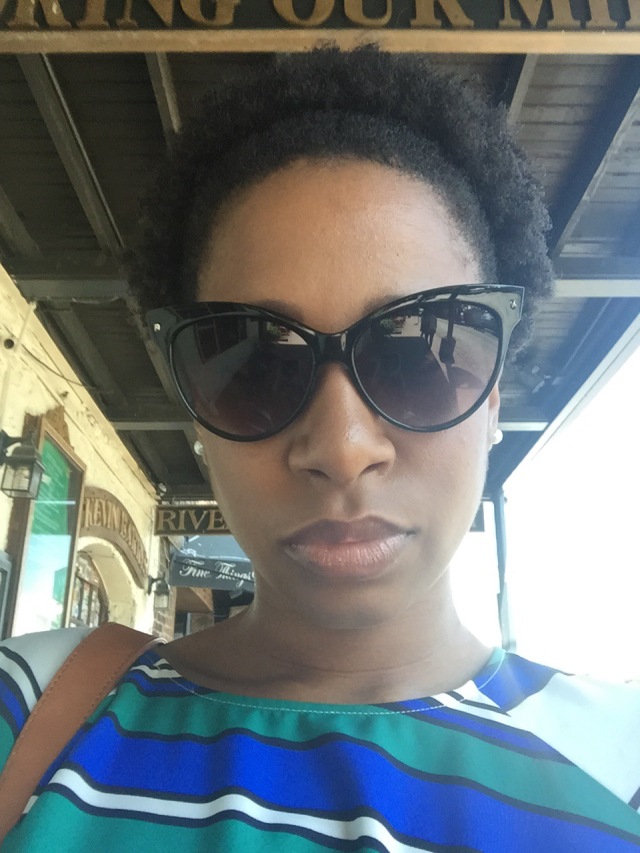 On River Street, I stopped at Savannah Bee Company and got a jar of delicious smelling hand cream. I sampled every honey in the store and tested two new lemon flavors that aren’t on the market yet. As if I didn’t have enough of a sugar high after all that honey, I bought a chocolate praline from River Street Sweets. It was very tasty but I could only eat half of it because it was so sweet (and huge!).

I purchased a copy of Midnight in the Garden of Good and Evil from a souvenir shop, then headed to a bar and ordered a “front porch peach tea” (an adult beverage) and took it TO GO! “Open container realness” was, in fact, real! I sipped my cocktail while walking down River Street and browsing in an art gallery. The aforementioned cocktail was one of the most delicious things I’ve ever tasted. 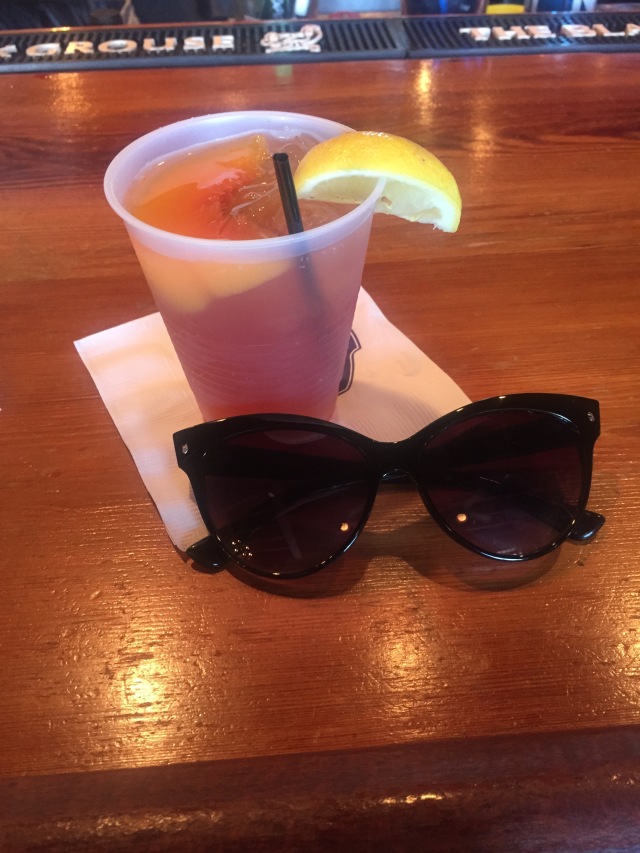 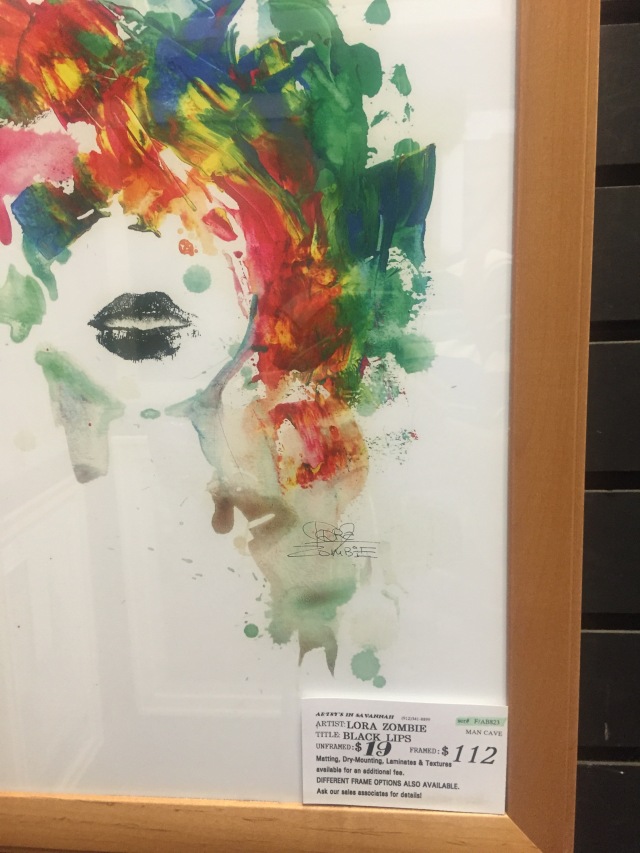 I then walked from River Street to a restaurant called Tequila’s Town (recommended by my friend Julia) for lunch. It was about a 15 minutes walk from River Street and I sweated like a whore in church the entire way there, but it was worth it–two-for-$4 margaritas! I ordered a chimichanga. Pretty sure the last time I ate a chimichanga was at Miguel’s Mexican Restaurant in Hodgenville in 2004–that experience was nothing compared to this one. The food was awesome! I even watched a man make fresh guacamole right at the table for the couple sitting next to me–pretty sweet. The waiter asked me if I wanted the second of my two-for-one margaritas to go. I giggled gleefully inside–you could drink on the street! How scandalous!
As I was leaving the restaurant I said, “This is the best day of my life,” out loud to myself. It may have been the adult beverages talking but oh well. 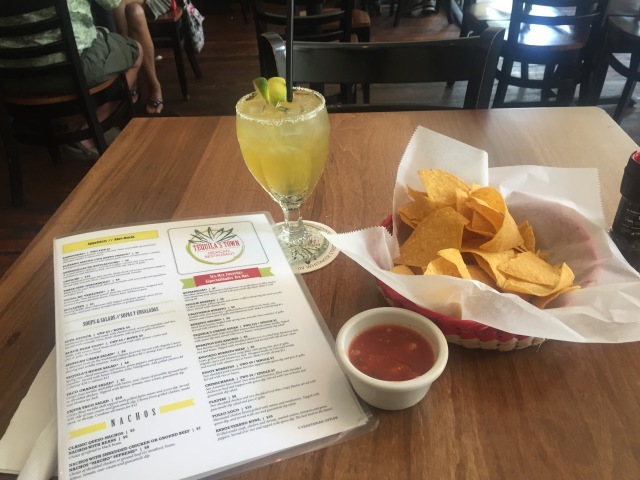 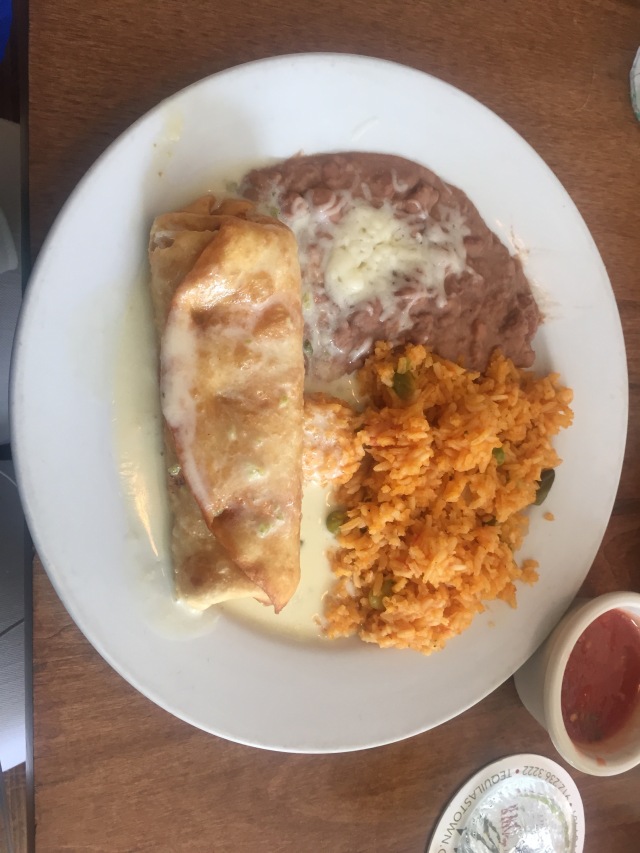 Next was exploring scenery and shops on Broughton Street. Gone with the Wind is one of my favorite books (along with its sequel, Scarlett) and the entire time I was on Broughton I couldn’t help but think, “This is where Scarlett came to buy boots!” I considered purchasing some footwear just to feel more like Scarlett, so I did. I bought flip flops on Broughton! I also bought socks–Gap was having a sale–and saw a funny sign in another shop about selfies. 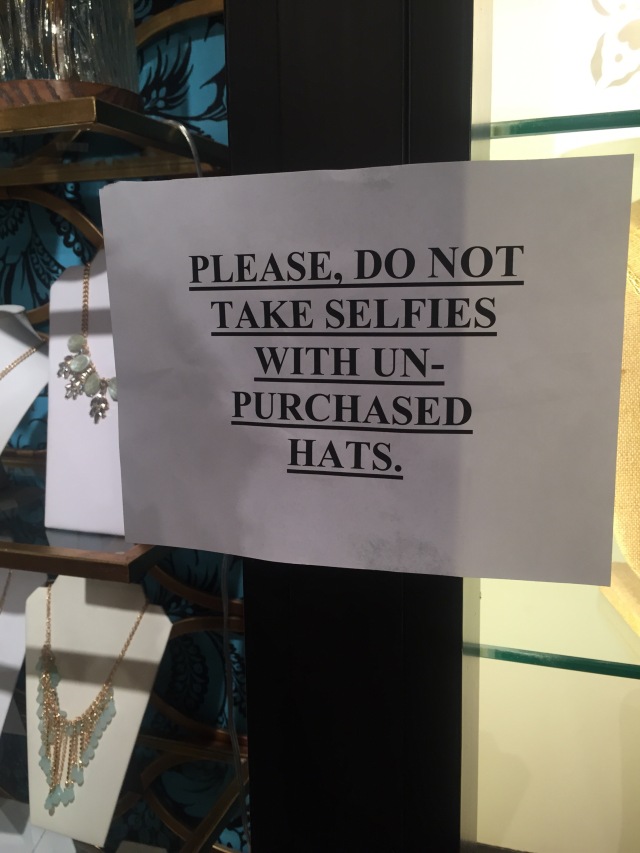 It started sprinkling around 3:30 so I hit up Leopold’s Ice Cream (no pun intended–it really did start raining). The line was kind of OOC (out of control) but I was able to get my hands on a single scoop of mocha chocolate chip in a cake cone. I listened to Beyoncé and the Jackson 5 (among others) while I ate it and checked Facebook while I waited for the rain to stop. Yay for free wifi!

After the rain stopped, I continued wandering around downtown until dinner time. I saw many interesting things like historical markers and beautiful architecture. I also saw a dude on a skateboard with a dog that looked like one of the Lost Boys from Hook. 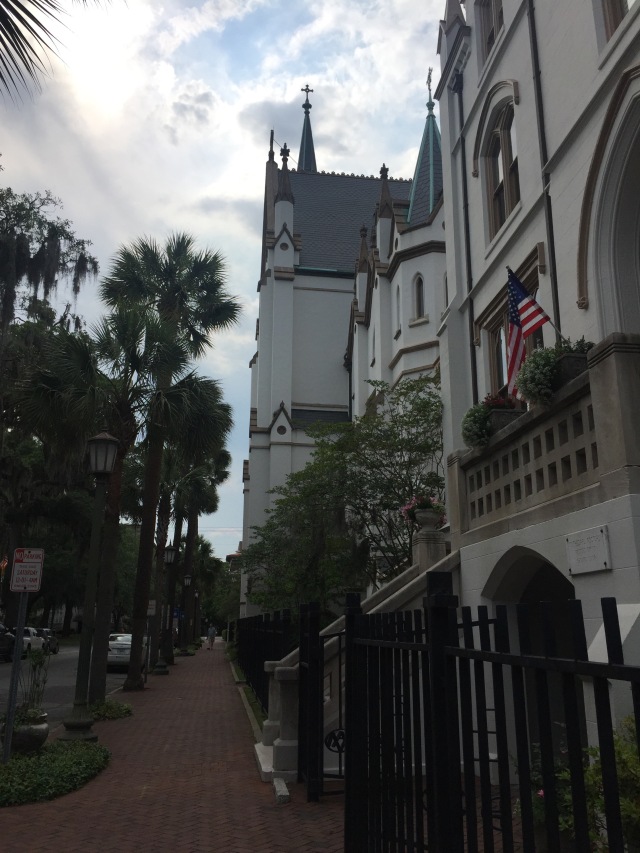 My final stop was dinner at The Olde Pink House. The waitress (Megan) asked if she could excuse herself to “fetch some bread for my table”–how fancy is that?!? She came back and asked me how hungry I was, then recommended an appetizer and two different entrees. Homegurl ran through all the ingredients too–she is good at her job for real.

I felt like such a lady eating there. They had full place settings and chandeliers and crisply starched tablecloths. The sweet tea was the sweetest elixir I’ve ever tasted. Best believe my sixth-grade obsession with etiquette came in handy; my back didn’t hit the chair, my elbows didn’t touch the table, and I was really glad I knew which fork to use. It was sad to think that when this house was initially serving meals, I’d be serving the table instead of eating at it. Slavery is the ugly side of the South. 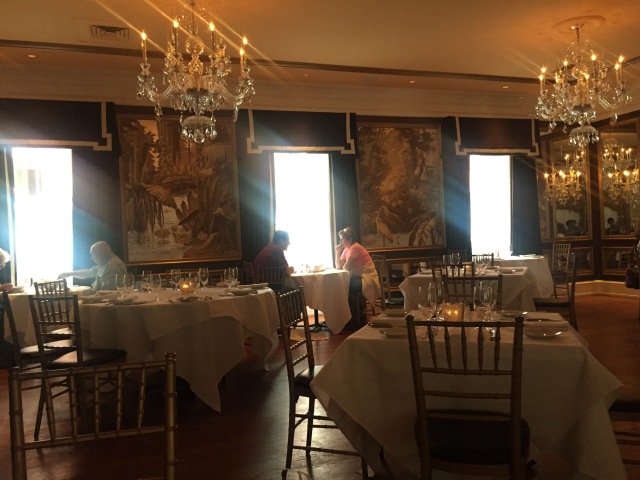 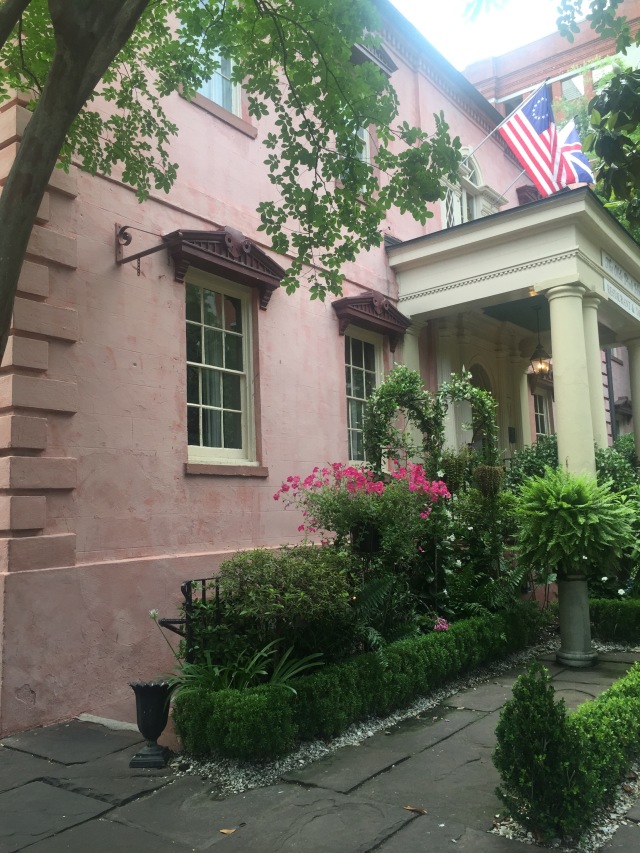 The meal was delicious. The collard greens tasted just like my Granny Aloma’s. The pork was fall of the bone tender. The mac and cheese was all kinds of flavorful. I was literally speechless after the meal…

…and also uncomfortably full. I waited forever for a cab and eventually used Uber (which just recently became available in Savannah, thank goodness). The driver said he had lived in Savannah his whole life and never ate at The Olde Pink House. I told him it was definitely worth a trip.
That concluded my day-long personal excursion in Savannah–I had an awesome time checking out the city! I definitely plan on visiting again and will make sure a ghost tour finds its way onto my itinerary.

The next day, I finally started work. During my two days of working, I was able to have lunch at a couple of interesting places: a sandwich shop with a King Kong theme and a good Latin restaurant called Latin Chicks. Per my adamant request, a group of us had dinner and drinks at The Olde Pink House the night before we left. 🙂

As for me personally…
Vegan Shxt
Melanin Squared
Fashioninkfitness

"He heals the brokenhearted and binds up their wounds." Ps 147:3

Create A Better Version Of Yourself